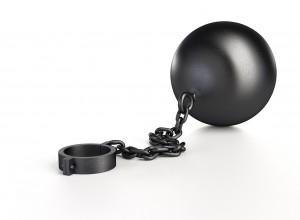 First right of refusal is a valuable defensive benefit for a sponsor, guaranteeing them the opportunity to review and take up a new sponsorship at the end of the contract, before it’s offered to a competitor.

The parties involved often assume that means it needs to be a similar offer to the one currently contracted – no matter how under-priced or badly structured it may be, or inappropriate it has become – making first right of refusal the sponsorship equivalent of a ball and chain. Thankfully, that’s not actually true, and you don’t have to live forever with a portfolio full of sponsorship mistakes.

There are instances where you do have to offer a continuation of the current (or similar) sponsorship benefits, but that’s generally structured as a “plus” contract. For instance, you could sell a “two plus one plus one” contract, where the first two years are guaranteed, with the sponsor having the option to extend the contract for a further one year twice. Note the difference: A “plus” contract is about extending a current contract, not creating a new contract for the same benefits, which is where first right of refusal comes in.

If you are in a situation where you’ve got issues with a sponsor and they have first right of refusal, there are some strategies you can use to turn that situation around.

If you don’t want to keep renewing the same sponsor for the same not-great deal, you have to accept the risk that you may lose that sponsor and that it may take you some time to replace them. If your organisation is a “bird in the hand”-type, that may not be the easiest internal sell.

What I will say is that the only way to guarantee you won’t get an appropriate fee from a strong, creative, engaged sponsor, is to continue to renew the inappropriate sponsor. And if you are using best practice techniques to sell, your odds of getting a new and much better deal are greatly enhanced.

Specify a window for negotiating a renewal

There have been instances where a sponsor has told the sponsee that they are very close to approving the renewal over and over, burning precious time and citing first right of refusal, basically bullying the sponsorship seeker into not approaching anyone else. They then back out at the last minute, effectively blocking sponsorship by competitors, while not investing any money.

To be clear, most sponsors wouldn’t stoop to that kind of bastardry, but some sponsors are just slow and bureaucratic, and you don’t want to be in a position where first right of refusal is limiting your ability to do your job.

When offering first right of refusal, you need to ensure that you specify a window for exclusive negotiations. That is, a timeframe during which you will only discuss this sponsorship with the current sponsor, not any of their competitors. Work with your potential sponsor to determine how long it generally takes them to make a decision, and put the end of that window far enough out from your event/season/whatever that you’re confident you can find a new sponsor, if the renewal doesn’t work out.

Not specified in your current contracts? All is not lost. You can send a quick letter during the term of the contract that says something like…

“We recently reviewed all sponsorship contracts and note that we haven’t specified a window for negotiating a sponsorship renewal with [brand].

We’d like to suggest that we present the new offer to you in October, with an aim to wrap up negotiations by the end of January. This will ensure that you have time to plan and implement a strong leverage plan with any new benefits we may negotiate. And as much as we want to continue working with you, it will also give us enough time to secure a new sponsor if we decide not to continue the relationship.

Please confirm whether this negotiation window works for you, and provided a suggested timeframe, if it doesn’t.”

Of course, we’re talking about altering contract terms, so be sure to check with your lawyer so that whatever you agree to is binding. That said, don’t make the sponsor jump through a bunch of hoops to change the contract in a way that primarily benefits you.

Sometimes a sponsorship is just bad. It may be way under-priced, or maybe the sponsor is totally disengaged and taking up space where a better sponsor could be. Either way, you know you don’t want to sign a new contract for more of the same. In that case, your best option is to change the game.

You need to make it clear that you’ve assessed the situation and that your relationship won’t be continuing in its current form. You could send them a letter along these lines…

“As you know, we’re coming up on the window for negotiating a renewal. As a valued sponsor, we need to let you know that we’ve done a review of our sponsorship portfolio and done some restructuring. As part of that restructure, we have determined that we have been significantly undervaluing the category of sponsorship you occupy, and it is much more appropriate for your category to be in the major or principal sponsor bands.

This commercial reality means that we will not be able to renew you for a sponsorship similar to your current investment. We would, however, like you to consider a more comprehensive investment – something that will provide even better returns for your brand. Can we make a time to discuss your needs and priorities going forward? That will allow us to create both a customised offer and a range of ideas for how you can leverage the greater scope of the sponsorship.

Of course, [Brand] is still our priority, and we want to continue our strong relationship, so we want to explore how we can continue to work together within our new sponsorship framework.”

They may decide that what you’re really saying is that the sponsorship is going to cost them more money – which you are – and decide to bow out straightaway. That’s not a bad thing, as you can then get straight into finding a new sponsor.

Be hard but fair

You’ve got a nightmare sponsor – a Sponzilla – and there is nothing in the world that will make you want to sign on for another year or three of that. No one would blame you for just walking away, except for that damned first right of refusal clause. Boooo.

This is a tough one, but sometimes salvageable. In this case, the best angle is often one of rectifying inequity. You could send a letter with some wording in it like this…

“We note that we’re approaching the negotiation window for sponsorship renewal. Upon review of the sponsorship to-date, there is clear inequity in the relationship and we’re not prepared to undertake any further sponsorship with [brand] under the same parameters.

If you’re open to it, we’re happy to try to reinvent the relationship to ensure that both of our brands benefit, and we both add real value to our relationships with target markets. I suggest we could start by setting up a collaborative brainstorm, where our teams can work through how this relationship might work going forward. That process will also clarify how much scope and/or resistance there is to continuing to work together. We’re happy to host and facilitate.

We are also happy just to make the mutual decision that we won’t go forward with the relationship, and if that’s the case, we wish you the best.”

This is a big risk, there is no question about it. You would only take this strategy if the brand really is a Sponzilla. But if they are, the only two solutions are a total overhaul or walking away.

I hope this has clarified what “first right of refusal” means and how to reinvent a relationship within its constraints.

For all you need to know about sponsorship sales and servicing, you may want to get a copy of The Sponsorship Seeker’s Toolkit 4th Edition.

If you could use some additional support, I provide sponsorship coaching, sponsorship consulting, sponsorship training, and if you need a fast, cost-effective start, the Jump Start program. If you’re interested in any of these services, please review the materials and drop me a line to discuss: