Ronaldo and Coca-Cola Make It Clear: It’s Time for Major Rightsholders to Grow Up 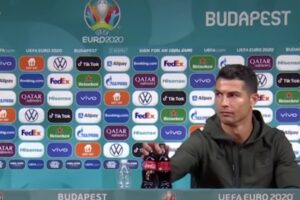 That was the 16 June headline in The Guardian. But they were hardly alone, with one after another major media outlet breathlessly decrying the supposed power of one superstar athlete to damage a global brand with a momentary gesture.

On 14 June, a few days into the COVID-rescheduled Euro 2020 competition, superstar and Portugal captain, Cristiano Ronaldo, appeared at a pre-game press conference. Upon taking his seat, he shifted the two bottles of Coca-Cola in front of him to an off-camera position, raised his bottle of water, and said, “Agua” (“water” in Portuguese). That was it. He moved a couple of bottles of Coke, and voiced his preference for water.

The operating word here is “roughly”, because most of the share price fall occurred in the 15 minutes the stock exchange was open before Ronaldo’s press conference began. And by the end of the trading day, the stock price closed well above where it was when the press conference started. For more detail, this excellent story outlines the non-impact of Ronaldo on Coke’s stock price.

That didn’t stop media from perpetuating this unfounded story of Ronaldo costing Coke billions for several days. Over a week after the press conference, The Guardian published a correction and deleted the article, as did other media.

During this whole kerfuffle, I was contacted by several major media outlets for comment on Ronaldo’s supposed multi-billion dollar transgression, including by one of Europe’s largest news organisations, for a possible live cross on their flagship program.

When asked about my take, I called it a tempest in a teacup – a blip in the news cycle that would be forgotten by everyone, including Coca-Cola, within a couple of days. I told them that if they were looking for a sponsorship expert to express the outrage of our industry, it wasn’t going to be me. I certainly wasn’t alone, as the same position was echoed by respected industry peers all over social media. Needless to say, I didn’t end up on the news.

A day after the incident, while media were losing their minds over Ronaldo’s “snub”, Coca-Cola came out with a statement:

Everyone is entitled to their drink preferences, as people have different tastes and needs.

No kidding. That’s why The Coca-Cola Company bottles a whole range of fizzy soft drinks and sports drinks and fruit juices and milk and coffees and teas and… wait for it… water.

In this nonchalant reaction to what had media running around like their hair was on fire, Coca-Cola…

If only that was the end of it.

In days following the Ronaldo incident, a couple of other players did a similar thing – shifting Coke bottles, shifting a Heineken bottle. UEFA had a few options:

But no. UEFA threatened to fine national football federations if their players moved drinks. Fine them, in a demonstration of counterproductive pettiness that will go down in the history of our industry.

First and foremost, UEFA could grow the hell up, and stop treating press conferences as some throwback to the early 90s, when sponsors thought all those tiny logos on the backdrop and incongruous product placements actually accomplished something for the brand. I mean seriously, does UEFA really think some finely honed athlete is going to rock up to a pre-game presser and say, “Now we’re talking. I love a Coke before a game”? Or maybe a help themselves to a beer?

It’s archaic. It’s an embarrassment to our sophisticated industry. And UEFA is far from the only major rightsholder doing it.

As for Coca-Cola and Heineken, these are sophisticated sponsors, creating sophisticated, fan-centric leverage programs, as well as comprehensive consumer, retail, and trade promotions. They know a bottle on a table (or not on a table) isn’t going to move the pin on anything that matters for their brands.

And even if UEFA – or any other rightsholder – is stuck in a time warp, that doesn’t mean sponsors have to use every useless, ill-fitting, or intrusive sponsorship benefit they’re provided. They could just say, “You know what? The bottles just don’t look like they belong there. Instead, let’s give participants the option of picking up a drink before going on stage.” And if they didn’t nix those benefits before the event, they should absolutely have done it, once it became clear that the incongruity hadn’t been missed by some players.