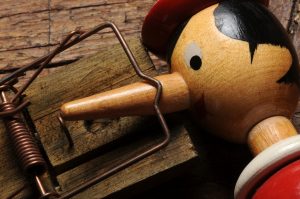 Really good sponsorship brokers are rare. They have extensive connections, strong skills, and a good work ethic. They’ll represent your property well, deal with you professionally, and will be worth every penny they cost.

Unfortunately, unscrupulous broker scams appear to be on the rise, and it’s causing immense damage to the organisations that fall for their wiles.

You think the broker has contacted you because they believe you could raise more sponsorship than you currently have, and they can use their connections, skills, and reputation to secure it and take a cut.

But that’s not the business model most scammers actually have. No, scam brokers make big promises, but they don’t secure any sponsorship. They don’t even try. Their business is to make money from the retainers.

With that in mind, this blog is part cautionary tale and part scam-avoidance checklist, so buckle in.

If you are a smaller rightsholder, with a broker offering to sell your sponsorships for a retainer plus commission, that’s a huge red flag. Over and over, I’ve seen smaller organisations that, frankly, don’t know any better, targeted by unscrupulous brokers that don’t appear to have any intention of actually selling sponsorship. Instead, they take advantage of the naivety and limited resources, pocket the retainers, and assume their clients won’t have the money or stomach for a legal fight.

Reputable sponsorship brokers aren’t interested in representing organisations unless there is very significant potential revenue involved. And while every broker has their own bottom line, I’ve seen very few that will take a client that doesn’t legitimately have more than US $100k to raise, and usually a lot more.

Note, this isn’t how much you want to raise, because every rightsholder wants to raise big money. This is about your legitimate commercial value, and before you spend any money on a broker, you need to get real. If you’re a relatively small player, you’re raising only small sponsorships right now, your property or organisation isn’t established, and/or your lead-time is short, then legitimate sponsorship brokers aren’t going to be interested, because it will be difficult to sell and their percentage cut just won’t be worth it.

To be clear, I’m not knocking smaller or more niche rightsholders. You can have solid commercial value and it can be very worthwhile to put some effort into seeking sponsorship properly, but the likelihood of a reputable sponsorship broker wanting to represent you is extremely low.

For more on the factors that go into how brokers choose clients, read, “How Much Should You Pay a Sponsorship Broker”.

Red flag #2: They offer a guarantee

The broker requests an upfront retainer, guaranteeing an often unrealistically large amount of revenue, and if they don’t hit that target, you get your retainer back.

Good luck with that.

Around the time you start asking questions about where the promised revenue is, they start ghosting you. Or they tell you they’ve got sponsors on the hook, and eventually send you fake contracts or letters of intent, which they’re hoping will shut you up for a while before they ghost you. You start escalating, and they start bullying, trying to wear you down, so you just go away and don’t involve lawyers.

Most good brokers will work on a retainer plus commission, with that retainer paid monthly. Broker scams want the whole retainer up-front, because then they’ve got your money, and you can’t withhold future payments, if they don’t perform as contracted.

Red flag #4: The broker contacts you

An unsolicited email, promising revenue and/or specifying the retainer and commission, without ever having even spoken to you, is a scam. It’s no more legitimate than that email from a “lawyer”, promising a million-dollar inheritance from your long-lost uncle, the Nigerian prince.

Legitimate sponsorship brokers don’t cold call, and they don’t send unsolicited, copy-paste prospecting emails. They don’t need to, as far more potential clients than they could ever take on will find their way to them. If they do any outbound marketing of their services, it will be done with surgical precision.

“We’ve raised over $325 million dollars in sponsorship over the past five years.”

“We’re the third-ranked sponsorship brokerage in the world.” (Which is not a thing.)

But if you ask for specific examples of major sponsorships raised, you’ll get the run-around. Same if you ask for references, unless they provide a (fake) mobile number to speak to their “client”. I’ve heard from several people that had this happened to them. They were suspicious, contacting the actual person via LinkedIn or their main corporate switch, asking if they’d just spoken. They hadn’t.

Let’s get real. If a broker has legitimately worked with huge, prestigious organisations and/or raised hundreds of millions of dollars in sponsorship revenue, they’re not going to be interested in representing your local festival or third-tier sport. They’re just not.

A low social media profile isn’t necessarily a deal-breaker, but if they’re making big claims about their revenue, clientele, or industry standing, and their social media presence is inconsistent with those claims, that’s suspicious. If they were reputable operators in the sponsorship business, that would leave a significant trail on the web.

Really unscrupulous brokers may also keep a super-low profile on social media on purpose. Why? Because they’ve preyed on small organisations that might not have the resources to get justice in court, so they use social media to air their grievances and warn other potential victims. No Twitter means they can’t be tagged. No Facebook or Instagram means people can’t tell their horror stories in comments.

One sponsorship broker to avoid

I’ve never shied away from calling out approaches that are counterproductive to good sponsorship, and the advancement of our industry, but I’ve generally avoided naming and shaming. Ever the optimist, my hope is that diminishing results and the wave of industry sophistication will move those approaches closer to best practice. With this particular situation, however, I’m making an exception.

A good place to start is with the considerable number of detailed Better Business Bureau complaints for Alpha Sponsorship Consulting – most of them still unresolved. That firm was listed on our broker registry for a bit over a year, up until we started getting complaints in May 2018 from their clients, including very small organisations, the arts, several causes and foundations, and at least three disability charities. The stories they told were consistent with the BBB complaints, raising all of the red flags listed above.

Alpha Sponsorship Consulting was voluntarily dissolved for the second time in late August 2019, less than ten days after the domain for Prestige Sponsorship was registered. Not long after, Prestige Sponsorship requested a listing on our broker registry, a page that sends many potential clients toward those brokers. During our vetting process, it became apparent that this company is a new initiative of Matt Delmore. We subsequently declined the listing.

On 29 October 2021, Matthew Delmore was sentenced to 47 months in US Federal prison, three years of supervised release, and restitution. He pleaded guilty to Conspiracy to Commit Wire Fraud, in relation to his sponsorship broker scam. In return, multiple individual cases of wire fraud were dropped by the US Government.

Sponsorship broker scams are the scourge of our industry. They waste the precious financial resources of organisations, but worse than that, they waste precious time.

The sponsorship sales window is finite, so the opportunity cost of falling for one of these scams is enormous. Losing five or fifteen thousand dollars on a retainer is bad enough, but those rightsholders are losing the opportunity to capitalise on their commercial value. They’re losing the opportunity to be legitimately in the sponsorship marketplace, until they realise the broker isn’t delivering, and it’s too late to sell. It’s also crippling their programs and events, as they would have no doubt budgeted on that guaranteed revenue, which never came.

If you ended up on this blog because you’ve had difficulties with an unscrupulous broker, I’m sorry you’ve had that experience, and I can assure you that most of the industry are decent, professional people. I do encourage you to file a complaint with the US’s Better Business Bureau, or your country’s consumer complaints equivalent.

For all you need to know about sponsorship sales and servicing, you may want to get a copy of The Sponsorship Seeker’s Toolkit 4th Edition. You may be interested in my white papers,  “Last Generation Sponsorship Redux” and “Disruptive Sponsorship: Like Disruptive Marketing, Only Better“.

If you need additional assistance, I offer sponsorship consulting and strategy sessions, sponsorship training, and sponsorship coaching. I also offer a comprehensive sponsorship capacity-building service for large, diverse, and decentralised organisations. Please feel free to drop me a line to discuss.