This has been a very strange Olympics, and in so many ways. The human rights abuses and Olympic hypocrisy around them; the weather; the infrastructure issues; the undrinkable water going viral. I love the Winter Olympics, but this is the most inglorious Winter Games I can remember.

That’s before we get to the sponsors, who have varied between getting it wrong and not doing much at all, leaving the door open for any ambush marketers who care to get involved. I’ve already covered the “other ambushers”; those non-sponsors who have done a better job at reflecting world outrage than the sponsors have dared to do (and good on them!). Aside from that, there hasn’t been that much ambush activity. There are two standouts, however:

The ubiquitous sandwich shop used their ambassadors – both Summer and Winter, current and former Olympians – in their ads. They timed it carefully, so as not to breach any rules about athlete endorsements of non-sponsors within the Olympic blackout period of 31 Jan – 26 Feb.

What they have done is “ambush up”. They have taken their genuine sponsorship of these athletes, used them together, and created the impression that their Olympic involvement is far bigger than it really is.  This is different than using an individual athlete, which can work very well, but it is always going to look like endorsement by one athlete.

Personally, I’m not a huge fan of this ad and I think they could have done something more fun with personalities of that quality, but it is what it is. And despite having a level of creativity somewhere in the vicinity of an ad for a monster truck rally, it does the job, surely part of which was annoying the hell out of McDonald’s.

When I saw this ad a couple of days after the Olympics started, I thought it was absolutely brilliant. Using the technical difficulty with the Olympic Rings in the Opening Ceremony to connect with Audi’s four-ring logo was inspired.

Apparently, this ad was created by an Audi fan, and if Audi doesn’t find this person and hire him or her, they are nuts. That degree of creativity, responsiveness, and love for their brand would have to be a rare combination. 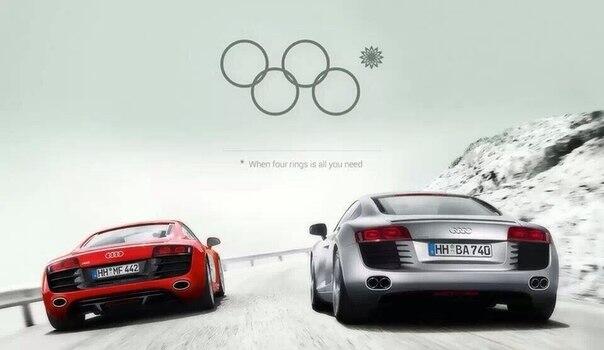