Should We Bother Measuring Sponsorship Awareness or Exposure at All? 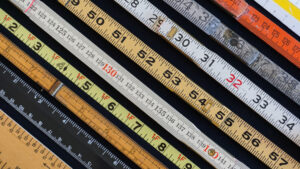 I’ve been getting this question often, of late. The good news is that most of the sponsors that ask have moved on from visibility-based metrics as their primary sponsorship measurement strategy, and are now measuring against overall marketing objectives, using a broad range of metrics.

The bad news is that, despite knowing that there are better, more strategic measures, they are struggling to move on. The argument is that as part of evaluating the overall sponsorship picture, awareness and exposure figures are useful. In reality, it appears to be more about comfort and habit. But like that ancient, tattered t-shirt from back in your university days, sometimes you just need to let go.

As soon as you measure something, it becomes important, and you’ll start working toward that measure. If you measure against a bunch of benchmarked overall marketing and business objectives, you’ll work directly toward them, just as a marathoner runs toward the finish line.

But intersperse mechanisms like awareness and exposure, and that will feed an unhealthy focus on those as legitimate measures of achieving something. It’s like judging the success of a shop by how many people walk past it. As any shopkeeper that has gone broke on a busy street will tell you, it’s not the passing traffic, but the people who come into the shop, buy from the shop, have loyalty to the shop, and advocate for the shop that keep you in business.

When both the approach and the measures have become so sophisticated and multi-faceted, creating a complete picture of what has actually been achieved, why on Earth would we throw in a measure that’s 40 years past its time? Madness!

Want much more on these generations, and how to make the most of best practice sponsorship? Read “Last Generation Sponsorship Redux”.

For more on how best practice sponsorship measurement is done, read “Sponsorship Measurement: How to Measure What’s Important“.

Put your sports fan hat on and think of the moving, blinking LED signage along the sides of the field or court or whatever – the signage that makes it harder to see what’s happening in front of it. That is literally called “interruption signage” – it’s created and marketed to take your attention away from the experience you’re trying to have. And the big proof point (eyeroll) is that brands that use this interruption signage have high sponsor awareness figures.

Well, of course they do. They’ve been annoying fans for an entire game. Does that translate into increased affinity or consideration or propensity to buy? Does it deepen loyalty or engender advocacy? Do you love the brands that do that to your fan experience?

“Can you name the sponsors of this event?”

That question isn’t giving you any good answers. It’s just a memory test, and not a very good one.

Every time the Olympics come around, there are the inevitable pre-event sponsor awareness surveys – often many months before the event, and before the bulk of sponsor leverage is in the marketplace. Long-time IOC sponsors generally rank high – eg, Coke, Visa – but there are often giant companies named that aren’t sponsors at all, and never have been. Armchair analysts see this as a disaster, but legit sponsors know that once their leverage is in the marketplace, their customers and the fans will be engaging.

How people answer this question has actually been studied. People name brands that have never sponsored the Olympics, because they make assumptions about the categories that probably sponsor a giant event like that, and then name the category leader or the one they use.

Well, if they weren’t aware before, they are now!

Wholesale exposure doesn’t move the pin, and you know it

Put your fan hat back on and have a think. How many logos did you see last time you went to a sporting event or some other big property? Dozens? A hundred? How many of them could you have named an hour after you left? Probably not many, but you can prove this for yourself.

Ask a friend next time you attend something big together, and I’ll bet the answer is around five, and when pressed to name them, s/he will get about three. Then ask if seeing – and noticing – those few logos, out of a sea of logos, changed how they felt about the brand in any way. Has their preference changed? Do they understand the brand better? Are they going to behave differently? Are they suddenly interested in switching car insurance or logistics or betting platforms? The answer is always no, and you know it is, because it doesn’t move the pin on you either, and you’re paying more attention than anyone else.

If a sponsorship is well-leveraged, fans will know your brand is a sponsor. That will have nothing to do with how visible your logo is, and everything to do with how thorough and meaningful your leverage program is. In that case, high awareness is caused by strong leverage, not visibility, despite anything a logo-counting dinosaur agency might tell you.

The answer is a question

The solution starts with a question. If someone in your organisation promotes measuring mechanisms, such as awareness and exposure, the conversation should go something like this:

You:  But why? What are we trying to accomplish by getting loads of exposure?

Them: To get front-of-mind awareness.

You: In a sea of 20 or 50 other logos, that’s a big ask. But let’s just say we do get front-of-mind awareness. What does that accomplish?

Them: They’ll be more likely to consider our brand. Seeing the brand next to something they love will increase their alignment to the brand, and increase their preference.

You: Then THOSE are the objectives. Increasing consideration, preference, and alignment. We already measure those things and have benchmarks. How are we going to take a direct route to achieving them with this sponsorship? How are we going to directly influence how people feel about the brand?

What about senior execs?

Here’s the thing about sponsorship: Everyone thinks they’re an expert, and this includes senior executives. And if a senior executive has convinced her/himself that exposure is a legitimate objective, that can monkey-wrench an otherwise strong leverage and measurement plan. In this case, I’ve got three pieces of advice:

I’m not saying you shouldn’t have visibility with your sponsorships. What I’m saying is that it’s a low-value benefit, and by concentrating on it, you’re taking your attention away from the benefits and leverage activities that will legitimately move the pin on your overall marketing and business objectives.

You may also be interested in my white papers,  “Last Generation Sponsorship Redux” and “Disruptive Sponsorship: Like Disruptive Marketing, Only Better“.