The Other Ambush: Standing Up for What’s Right when Sponsors Don’t 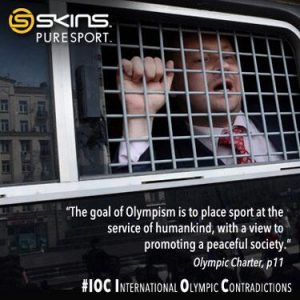 Normally, when the Olympics roll around, I’m having a field day picking apart sponsorship strategies and, in particular, analysing the ambush marketing activities. Truth be told, ambush marketing gets me a bit giddy, lying as it does at the intersection of strategy and troublemaking.

But this time around, the ambushers haven’t come to the party like they have in the past. Hell, the sponsors haven’t even come to the party. I can just see all the usual ambush marketing suspects gloating – not because they’ve done something so clever to gain marketing benefit for their brands, but because they’re the lucky ones with no IOC contracts, so they can stay well away from this debacle.

But this Olympics has given rise to a new type of ambusher; one that is smarter, shrewder, and more in touch with their target markets than ever before.

Before we go into this new type of ambush, I’ll give you a quick primer on how strategic ambush works.

Olympic organisers control the event itself, the promotion of the event, event assets, and the IP belonging to the event. They control some of the content, but the athletes and teams have control over their own assets and IP, and media also control some of the content. There are a few laws enacted that give them control over public spaces and media within a designated zone, but that’s it. In the grand scheme of things, major events like the Olympics don’t really own very much. 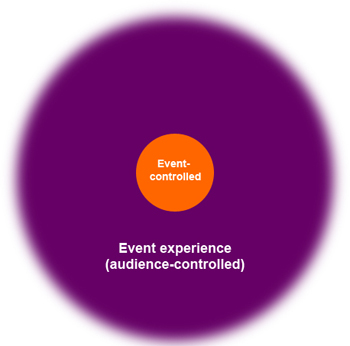 On the other hand, we have the Olympic experience, which is controlled by the people. Their experience includes everything from the first moment of anticipation to the last faded memory and everything in between. It is the atmosphere, pride, patriotism, the dramas and triumphs, the opportunities and inconveniences. It’s news coverage and television and blogs and Facebook and Twitter. It’s the stories, the rumours, and the scandals. It’s the outrageous once-in-a-lifetime adventures with friends and the little moments that touch our hearts. It’s the feeling of I-was-there and the memories of exactly where you were when something amazing happened. Events don’t own any of that. We do – the people, the fans. The residents of host cities and the tourists do. You don’t have to attend an event to have an event experience. Event experiences happen in pubs and parks and living rooms and subway stations. They happen on computers and mobile phones and in traffic jams.

When sponsors of these mega-events spend so much of their energy concentrating on leveraging the event itself – that is who they wrote the giant cheque to, after all – they often pay little attention to the event experience. Part of that is certainly that marketing within that that fan-driven event experience, means that sponsors will lose control of the message, and “losing control” is anathema to the Olympic family culture. That makes the Olympics, and other mega-events, relatively easy to ambush. Want to check out how some of them worked in London? Right here.

With what is sure to go down in history as the worst Olympics ever, that cheeky, strategic, London-style ambush is nowhere to be seen. Instead, we’ve got a fan base that has never been more invested in what is going on in Sochi, on levels that go way past sport. The IOC is the villain who has taken hypocrisy to the next level, and the whole world wishes Putin would just put his shirt back on and grow the hell up.

And amidst all of this, the sponsors are haplessly trying to deal with a degree of fallout and vilification that they never anticipated, and they’re failing miserably. In this lies an opportunity for one of the most powerful ambushes that has ever happened.

While the sponsors issue the blandest possible statements, and their leverage programs have become the sponsor equivalent of a little kid with fingers in his ears chanting “la la la la la…”, a few brands have stepped up to support and amplify the voice of the people. Their ambush isn’t about benefitting from people’s love of the Olympics. It’s about standing up for people’s passion for human rights; it’s about acknowledging how wrong the IOC is for being complicit.

These ambushers don’t need to worry about IOC retaliation, because they have no relationship with the IOC, and in that, they have the freedom to say what the sponsors apparently don’t think they can.

Is this good for the ambusher’s brands? Absolutely. While I can’t imagine any of them see this as a fast-turnaround money-maker, they are creating a degree of admiration and alignment with their brands that those IOC TOP sponsors could only dream about… Unless, of course, one of those TOP sponsors were to grow some balls, but I can’t see that happening.

And with that, let’s have a look at a few of the “other ambushers”.

So ubiquitous, their company name has become a verb, but Google pulled off one of the quietest, and yet most visible ambushes I’ve ever seen.

On the day of the Olympic Opening Ceremony, their Google home page doodle looked like this =>

They’re huge, their target markets could not be more diverse, and they have the second highest market capitalisation of any company in the world. There are a hundred reasons why some committee somewhere in Google could have killed off this simple idea, but they didn’t. And it went viral. Yay, Google. 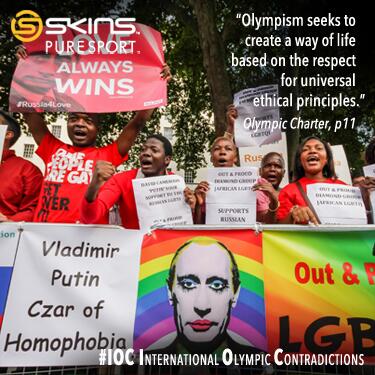 SKINS has a long history with sport-related social activism. They understand that the “true spirit of competition” really matters to sports people and sports fans alike – me included – and they routinely speak out against the corrupt and unjust in sports, going so far as actually driving much needed change.

Their concept around Sochi is to rebrand the IOC as “International Olympic Contradictions”, juxtaposing quotes from the Olympic Charter with photos of the violence and oppression of LGBT rights in Russia. That very powerful graphic at the head of this blog is also one of theirs. They are pointing the finger squarely at the IOC as the villain and make a very compelling, very shareable case.

“The campaign highlights the recalcitrance of the International Olympic Committee in selecting a country to host the Winter Olympics that doesn’t acknowledge the rights of all to live in a safe and comfortable environment. As the Olympic Charter itself says, the IOC will ‘act against any form of discrimination affecting the Olympic movement’ but in selecting Russia and Sochi, the IOC has effectively endorsed a country which has a dubious human rights record and an active policy of repressing the freedom of one group of individuals.” – Jaimie Fuller, Chairman of SKINS

For a compelling look at their plans and rationale, check out this blog by SKINS Chairman, Jaimie Fuller. To see their activity unfold, follow @SKINSPureSport on Twitter.

Disclosure: I worked with SKINS on this campaign, but the IOC idea wasn’t mine. I wish it was.

I love Lush. My home is full of gorgeous Lush soaps and potions and my crazy curls don’t happen without Trichomania shampoo. But I love them even more since they’ve launched their Sign of Love campaign.

They are encouraging customers and fans to draw a pink triangle on themselves in solidarity with LGBT rights, and upload a photo to Facebook, Twitter, or Instagram, tagged with the #SignOfLove hashtag. On Valentine’s Day, they will be presenting photo petitions to Russian embassies worldwide.

This is supported in every single one of their stores around the globe, except in Russia, where it would be breaking the law.

“Valentine’s Day is the perfect to time to stand up [for] everyone’s right for love. No country, company, or individual can stop love; all they can do is punish people for that love. To do so – to forbid or criminalise love – is unnatural and cruel, so I am proud that we are standing in solidarity with LGBTQ people and campaigning for equal love.” – Tamsin Omond, head of Lush campaigns

US telecom, AT&T, isn’t an IOC sponsor, but they are a major sponsor of the US Olympic Team. They have been the only Olympic-affiliated sponsor who has spoken out. This has, in effect, been an exercise in “ambushing up” – the practice of using ambush marketing techniques to make a lower level sponsorship seem larger.

That won’t actually work that way for them, as AT&T doesn’t have a global presence, but their statement now does. Imagine if a few more of the team sponsors took a page from that playbook – global brands. Imagine the impact.

Check out AT&T’s Sochi statement here. I was impressed.

But is it ambush?

It certainly is, and I think we’ll see more of it. We’ve got the World Cup in Brazil this year and the Olympics in Rio in 2016, and the human rights issues there are horrendous and widespread. Then there’s the contentious selection of Qatar as a World Cup host country. Now that sponsors have shown their soft underbellies – the fact that they can’t align with the greatest fan passion point, for fear of upsetting the IOC or FIFA – ambushers will know exactly how to exploit it. All they have to do is be braver than the sponsors and they’ll look like the heroes.

These three companies, and in particular SKINS and Lush, have used their resources and their networks to create a platform that amplifies the frustration and angst AND gives it a focal point. It’s the difference between a million people talking amongst themselves and a million people saying exactly the same thing at the same time in one deafening roar.

If this was incongruous with their brand values or corporate culture, this wouldn’t work, but it’s not. Both of these companies have a pedigree of social activism, and what they’re doing seems natural. But I don’t believe a company has to be a crusader to speak out. There are thousands of companies – including some of the Olympic sponsors – who have very inclusive, socially aware corporate cultures, and who could make an authentic statement about their position. That would say something about what their brand stands for, aligning that brand with target markets in a way that some flash-in-the-pan promotion never will.

Interested in my take on IOC hypocrisy? You should read “IOC Gets a Gold Medal in Hypocrisy“.

Or how the IOC sponsors are getting it so wrong for their brands at Sochi 2014? Read “Olympic Sponsor Cowardice is Bad for Business“.